Cruising stocks floated about as well as a sack of bricks on Wednesday. A Morgan Stanley analyst made negative comments about the industry, and questioned one company’s ability to withstand a recession.

Analyst Jamie Rollo lowered his price target for Carnival Cruise Lines (CCL) to $7, and placed a worst-case scenario price target of $0 on the stock. Carnival, the world’s largest cruise line, dropped 14% on the news to close at $8.87.

Rollo raised legitimate concerns about Carnival’s ability to raise capital if an economic downturn should occur. The company lost $1.8 billion in its most recent quarter.

According to the chart, Rollo’s base-case price target of $7 is likely to be met. Carnival is trapped in a bearish channel (diagonal lines). The channel predicts that Carnival will fall below $6, which is the mean of the channel. 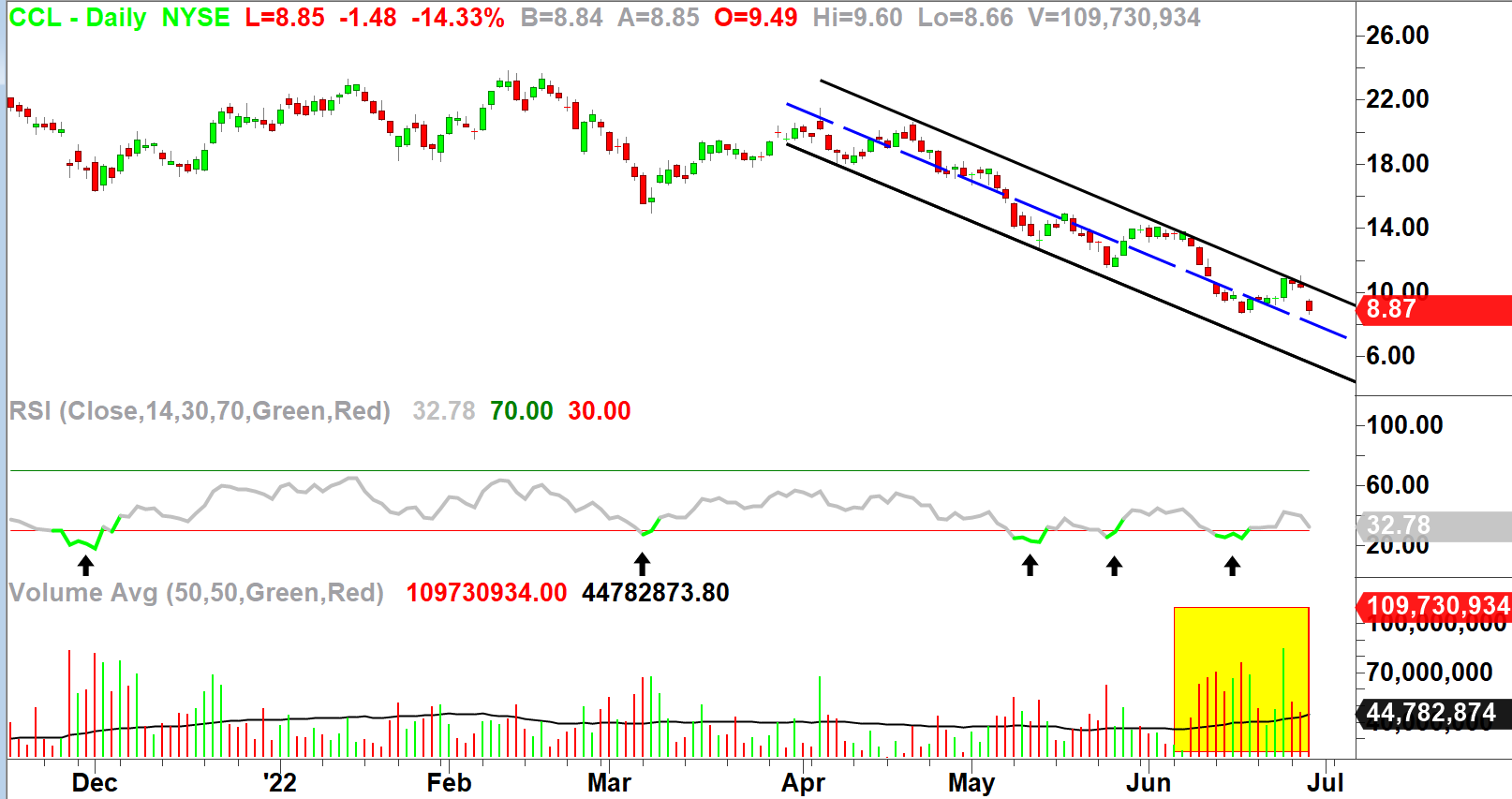 Carnival’s volume has been steadily increasing over the past three weeks (shaded yellow). The increase in turnover could be a sign of institutional selling. Wednesday’s selloff occurred on 2.5x Carnival’s normal volume.

According to Carnival’s RSI (relative strength index), this stock isn’t yet oversold. Even if it was, I wouldn’t buy Carnival at its current price.

Carnival has been oversold on five occasions since December (arrows). While each oversold reading led to a bounce, the stock eventually reached a lower low on every occasion.

The chart of Royal Caribbean Cruises is nearly identical to that of Carnival. RCL’s chart has a similar bear channel, a comparable increase in volume, and five oversold RSI bounces, just like Carnival. 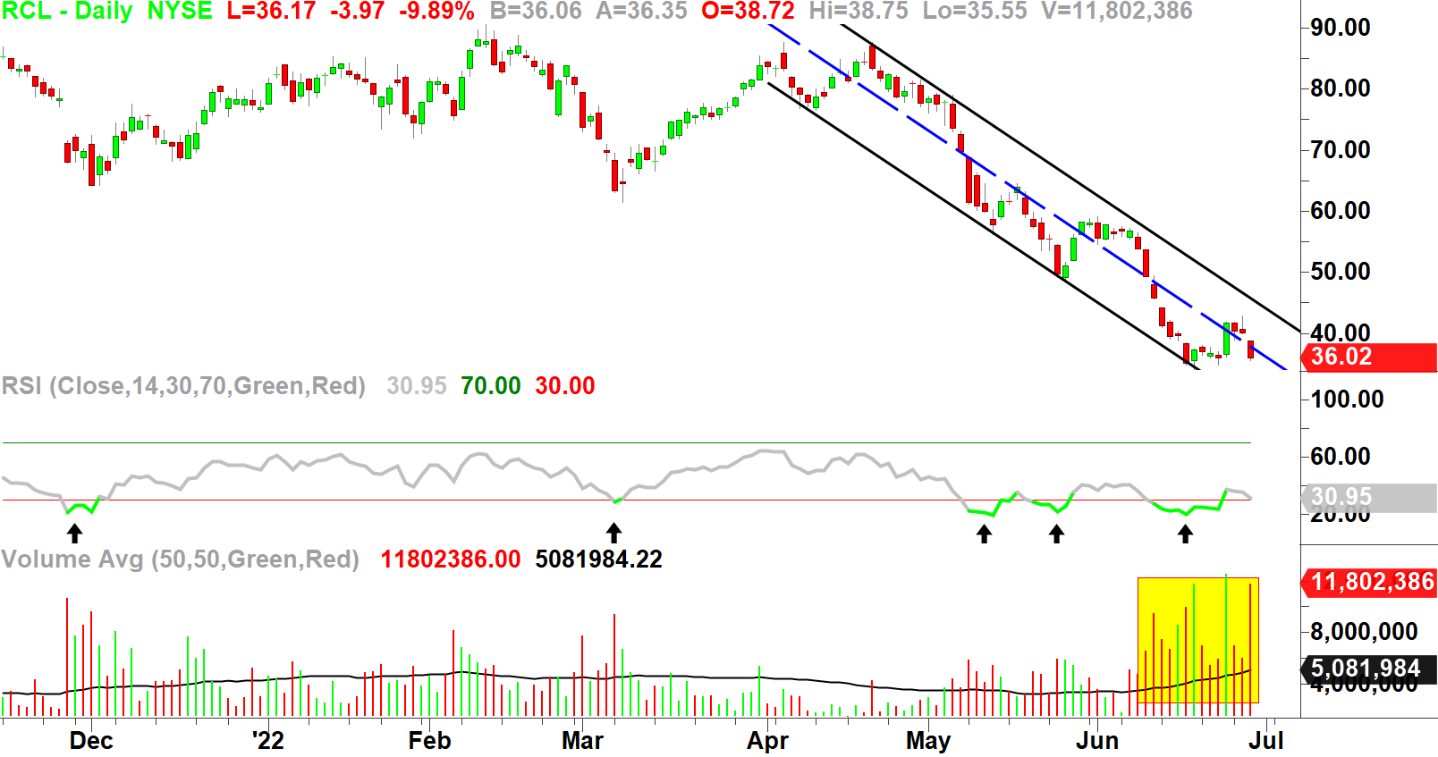 The chart of Norwegian Cruise Line Holdings also has a similar look. 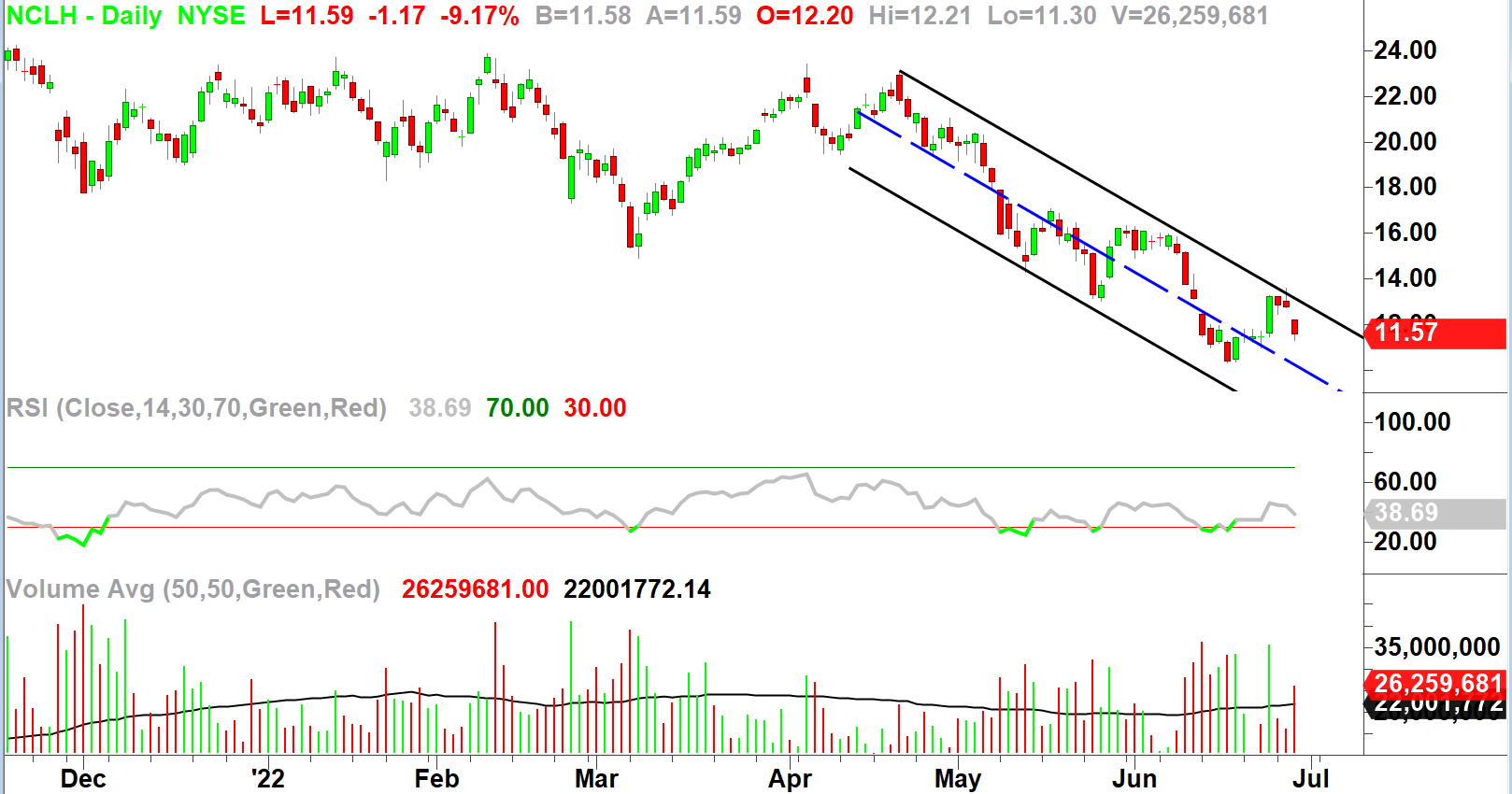 Here’s the takeaway: All three of these stocks are going lower. The downside momentum is strong in this sector, and nearby support — formed just last week — is unlikely to prevent a move to fresh 52-week lows for all three names.

However, these stocks are priced for an industry-wide calamity, and I’m not sure that’s realistic.

Rollo’s worst-case scenario is based on a potential economic downturn, but cruising enthusiasts tend to be older and wealthier. They are among the least susceptible to a recession.

Bottom line: These stocks should continue to sink, but not all the way to Davy Jones’ Locker. If I can get Carnival at the low end of the channel — under $5 — I’ll dive in.

Get an email alert each time I write an article for Real Money. Click the “+Follow” next to my byline to this article.

What happened after the UAE changed its work week

China’s heatwave could have knock-on effect on its economy: Economist

My second husband would like to inherit part of my home as he pays half the mortgage. I want 100% to go to my...

Ukraine: ‘We’d take a nuclear attack over being a part of...

Big Ten Players Wonder Where They Fit Into a $1 Billion...

Nicaraguan police detained a bishop and other priests in raid :...

Passport warning: ‘Most important’ rule change since Brexit – checks you...

The FBI Is Not Anticipated To Resume Its Inquiry Into The...

Mexican cartels flexed their power in Tijuana. Now a battle for...

Ellie Goulding on her ‘crippling’ condition – how to cope with...

At least 12 killed in Somalia capital Mogadishu in hotel attack...