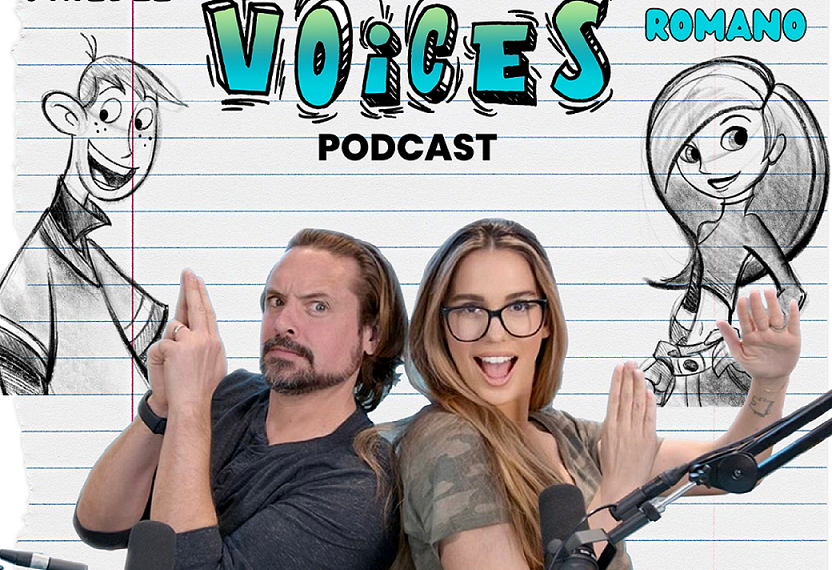 You don’t have to call them or beep Christy Carlson Romano and Will Friedle to reach them. The Kim Possible stars are connecting with audiences these days together through their I Hear Voices show for iHeartPodcasts.

Each week the two bring on guests from fellow voice actors across the world of entertainment. Here they looks back at the first year of the podcast, and remember Kevin Conroy, the legendary voice of Batman. Plus, Carlson Romano (Even Stevens, Big Hero 6) and Friedel (Boy Meets World, Batman Beyond) explain how they would like Kim Possible and Ron Stoppable to go on new adventures.

How is it being able to shine a spotlight on voice acting through your podcast?

Will Friedle: It’s constantly morphing this wonderful little show we started. We love animation so much and the different facets of voice acting that are out there. It slowly started to morph. We keep ever changing which is fun, but the guests have been phenomenal.

Christy Carlson Romano: We’ve had the who’s who so far, and it just keeps growing. We just had Jenna Davis, the voice of M3GAN, the doll. All sorts of amazing people from across the spectrum of voice talents. We’ve also had Neil Ellis from Call of Duty.

Will: We’re hitting video games too. There is so much in the world of voiceover now, whether you are doing standard animation, primetime animation, ad reads, videogames, or films like M3GAN. Voiceovers are everywhere. We are everywhere. We want to showcase this world. Our very first guest was Eric Bouza, who sat there with us trying to teach us to do the voice of Bugs Bunny. The late Kevin Conroy was a dear friend of mine. And no longer with us. Just talking about the evolution of the Batman character and how he played Batman longer than anyone else. We’re excited about the people we get to talk to.

There was such an outpouring of love after Kevin’s passing. It really shows the mark he left.

Christy: For me, Kevin represents just how talented voice actors are. He started with Shakespeare and brought that to his character. Everyone in our industry says it’s called voice acting, meaning you’re an actor first. Kevin was absolutely the absolute version of that. He was an amazing professional and an actor.

Will: He and I had a lot in common. We’re both from Connecticut and our first voiceover audition ever was Batman. As I said this to Kevin when he was around, he could have easily been a jerk. He was just so open and caring and inclusive and took me under his wing. It was a world I didn’t know. It’s just a different form of acting. He was such a beautiful man who left a beautiful legacy and mark everyone that met him and millions who didn’t.

Will, do you have a favorite memory with him?

I go back to the first time I met him when he taught me to sit back in my chair when I address the microphone or roll open my diaphragm. How to turn my pages without making noises. When I I saw him last, we were at dinner in Wales at a convention talking about the last 25 yeast we’ve known each other. He was just an incredible man. He will be missed. The cowl will remain empty. A lot of people will play Batman and most of them will do it beautifully, but nobody will do it with the gravitas of Kevin.

Among your other episodes was a Kim Possible 20-year reunion from the original premiere. Where would things be for Kim and Ron if the series made a return? What do you see?

Christy: I just want to see it greenlit.

Will: We’ve never really asked each other. Where do you see Kim and Ron now?

Christy: We’ve always said they would have twins and be parents and still be together. It would be like The Incredibles where they would fight crime together.

Will: I see it the same way. Here is the joy of the writing of Kim Possible. What [creators] Mark [McCorkle] and Bob [Schooley] are able to do it’s so timeless. If they wanted to they could pick up right where they left off. You can do the same open title sequence and then would be like no time had passed at all. The joy of animation is it’s a time machine. A voiceover actor providing, that you don’t start at 5 or 6, can still hit those registers and still become those characters. That’s the fun. When they say you are Kim and Ron again, we can snap right back to where we left off.

Christy: Wouldn’t it be so much fun? Our podcast gives the fans a chance to see us in action again. I think our audience has missed us and being together and hearing our voices together. We have a great camaraderie with the podcast. We have a great friendship .it’s still fun being in the same space.

Will: I agree it is a ton of fun to be in the same space as me.

Like Kim Possible, there are so many animated shows that have been adapted into live-action movies or TV shows. They’ve really been hit or miss.

Will: I agree. There are so many horrible things that came from the pandemic. There are some wonderful things too, as awful as that sounds, but there was an explosion of animation. People could record from their homes. Animators can still draw cartoons. Anime really exploded during the pandemic. There are these animated shows that are being rediscovered by a whole new audience by giving life to these different styles of animation. It has become a big important fandom for people.

How much do you think conventions have helped bring visibility to voice actors?

Christy: We were not allowed to go to conventions when Kim Possible was first starting. I think they weren’t as mainstream. I think that was in terms of IP and selling our photos with the logo on them. I don’t think Disney wanted to take that chance. Now I think everyone understands fan engagement is so important.

Will: It’s so strange you can see the growth of the comic convention with the growth of social media. People saw how important the fan was…I’ve never had a bad experience. They are completely inclusive. It’s just the nicest place in the world. Whether it’s doing something like ordering a pizza or calling the cable company, have your voices gotten recognized?

Christy: I think someone cut me off on the 101 back in the day. Super angry road rage and literally their license plate said “Kim Possible Fan.” I was like, “Am I hallucinating?” That happened.

Will: I remember ordering a burrito at Chipotle and the guy behind me went “You’re Ron Stoppable!” I must have been ordering a taco, and my voice got higher.

How have social media and new technology further opened the door for budding voice actors to break into the industry?

Christy: We talk about socials all the time. I’m on one end of the spectrum, and he is on the other. It gives us a really great perspective and appreciation for the positives that come from social media. I recognized so much talent on TikiTok as much as people want to down it. It is a marketplace for anyone and everyone who has a phone.

You’re providing an incredible opportunity for someone to break into a career in voice acting. Tell me about the “I Hear Voices” contest you are running.

Will: Submit a video of up to two minutes of any kind of voice. There are some truly awesome prizes for the winner including a trip to Los Angeles to have lunch with myself and Christy, $1,000 spending money, and a one-hour coaching session with Sam Riegel and/or Mary Elizabeth McGlynn from Critical Role. The coolest thing is you get to meet your new agent for a year from CESD, my voiceover agency. You can submit your videos to [email protected] through February 9. We’re giving you your big break to kick open the door and start your career. We always say if you think you got what it takes, step up to the mic. Put your voices where your mouth is.

Will: Bradley Cooper is someone who does Rocket Raccoon. I’d love to talk to Vin Diesel. How do you do a whole movie where you’re just saying, “I am Groot?” How is recording?

Christy: This is a dream, but never say never. Angelina Jolie has the most beautiful voice and beautiful everything. I actually voice-matched her for a Kung Fu Panda video game at one point. It would be really cool to have her on.

Listen to episodes of the “I Heart Voices” podcast here.

Kim Possible is streaming on Disney+