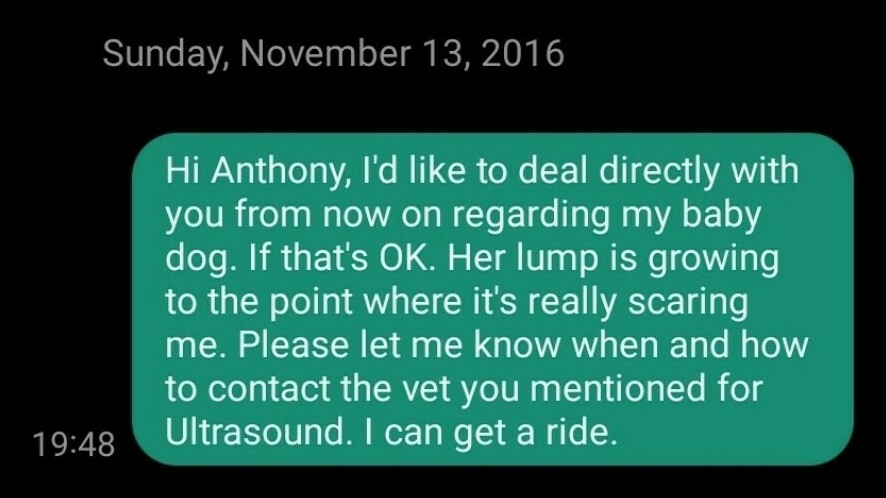 Rich Osthoff and Sapphire, a pit bull who he said saved his life. Osthoff told NPR that Rep. George Santos launched a GoFundMe campaign to raise $3,000 for a surgery for the dog in 2016 — and then kept the money.

Rich Osthoff and Sapphire, a pit bull who he said saved his life. Osthoff told NPR that Rep. George Santos launched a GoFundMe campaign to raise $3,000 for a surgery for the dog in 2016 — and then kept the money.

About two weeks ago, Rich Osthoff was watching the news when suddenly he saw a familiar face.

The man had dark hair and glasses, and he was walking outside the U.S. Capitol, surrounded by reporters.

“I didn’t recognize him right away, but I knew he’d crossed me in the past and he had done something awful to me,” Osthoff, a Navy veteran from New Jersey, told NPR.

Then suddenly a reporter on the screen yelled something along the lines of “What’s your name today?” Osthoff said. And that’s when it struck him.

The man on television was someone he’d been introduced to in 2016 as Anthony Devolder — a man Osthoff says took thousands of dollars of money from a GoFundMe account that was meant for a lifesaving surgery for his beloved service dog. A man now known as the newly elected Republican Rep. George Santos of New York, who has been caught in a slew of lies and deceptions about his résumé, family heritage and personal life and who is now under investigation.

“I just keep thinking, ‘How is he a member of Congress? How does somebody that low rise so high?'” Osthoff said.

In May 2016, Osthoff was living through one of the darkest periods of his life, he told NPR. His story was first reported by Patch.com.

He told NPR that he was living in a tent in an abandoned chicken coop. He said he was suicidal and his service dog — an 80-something-pound, caramel-colored pit bull named Sapphire — was the only thing keeping him alive. Then she got sick.

Panicked, Osthoff scraped together whatever cash he could and headed to a nearby veterinarian in Howell, New Jersey. Sapphire had a 10-pound tumor and needed an operation. The surgery would cost $3,000.

“When I heard that, I didn’t know what I was going to do,” Osthoff recounted, adding that he’s now on medication and in group therapy for post-traumatic stress disorder and bipolar disorder.

“At least two times when I had Sapphire, she saved me from killing myself. I could not think about hurting myself and then leaving her in this world to live with anybody else.”

With no way to pay for the procedure on his own, it seemed like a miracle when a veterinary technician at the clinic had the idea to connect Osthoff with a supposed nonprofit charity called Friends of Pets United that was run by a man named Anthony Devolder.

The name is one of several that the new congressman has gone by in the past. In 2019, The Queens Gazette wrote about George Anthony Devolder Santos announcing his first campaign bid for New York’s 3rd Congressional District, in northeast Queens and Long Island — the seat he now holds. The article also states that he “founded and ran a nonprofit 501(c)3 called Friends of Pets United (FOPU) from 2013 – 2018.”

NPR has found no records of a registered nonprofit under that name.

Santos also appears to identify himself as Anthony Devolder, the founder of a group he calls United for Trump, during a Q&A session at an LGBTQ event in 2019.

According to Osthoff, the two never met in person, but with the veterinary tech acting as a go-between, Santos acted quickly to set up a GoFundMe page for Sapphire. Osthoff posted a link to the account on Facebook: “Click here to support sapphire The Veteran rescue! by Anthony Devolder,” the headline read.

Donations poured in, and by the end of June, the goal had been met. Osthoff was elated.

“But then that’s when everything went wrong,” Osthoff said.

Rich Osthoff told NPR that he was elated when the GoFundMe account reached its $3,000 goal. He had no idea he’d never see the money, he said.

Rich Osthoff told NPR that he was elated when the GoFundMe account reached its $3,000 goal. He had no idea he’d never see the money, he said.

With the money tied up, Sapphire’s condition worsened

Santos closed the GoFundMe account and refused to transfer the money to Osthoff “and I really couldn’t understand why,” he said.

Eventually, Osthoff got Santos’ phone number from the veterinary tech and began calling and texting a phone number that NPR has since connected to Santos.

“Hi Anthony, I’d like to deal directly with you from now on regarding my baby dog. If that’s OK. Her lump is growing to the point where it’s really scaring me,” Osthoff texted Santos.

Rich Osthoff sent a series of texts to a cellphone number that NPR has connected to Rep. George Santos.

Rich Osthoff sent a series of texts to a cellphone number that NPR has connected to Rep. George Santos.

Santos was initially responsive, although he insisted that he needed to remain in control of the money. He also insisted that Osthoff take Sapphire to a veterinarian in Queens, N.Y., explaining that the charity organization, Friends of Pets United, often worked with the clinic and had some sort of “credit” there. Osthoff said it remains unclear to him why Santos couldn’t pay a veterinarian with the thousands of dollars raised from the GoFundMe fundraiser.

It was a big ask for Osthoff, who was still homeless and doesn’t drive. But Osthoff finagled a ride with the veterinary tech and enough money to cover the tolls. Once there, he said, the Queens veterinarian said Sapphire was not a good candidate for the surgery — “which was the opposite of what the other vet in New Jersey said.”

Osthoff shared with NPR several screenshots of messages that he says are between him and Santos. In them, Osthoff pleads with Santos to let him take Sapphire to a local veterinarian. In September and then again in October, a desperate Osthoff forwarded Santos the name, phone number and address of a local animal hospital.

Then, in a message dated Nov. 13, 2016, Osthoff wrote, “My dog is going to die because of god knows what. … I’m sick of being jerked around. I’ll take her to another vet, but that cash was raised on her behalf.”

The replies from Santos’ phone number read in part: “Remember it is our credibility that got Gofundme … to contribute! We are audited like every 501c3 and we are with the highest standards of integrity. …

“sapphire is not a candidate for the surgery the funds are moved to the next animal in need and we will make sure we use of resources [sic] to keep her comfortable!”

GoFundMe did not respond to NPR’s requests for comment.

Osthoff said he became so desperate that he enlisted the help of a friend. Michael Boll is a retired Marine Corps veteran and Union Township, N.J., police sergeant. He launched a nonprofit for veterans called the New Jersey Veterans Network.

“When I first got involved, I thought it was a simple misunderstanding that could be fixed with a simple phone call,” Boll told NPR.

But when he got Santos on the phone, he said, Santos claimed he planned to give the donations to another charity group. Boll said he told Santos he couldn’t do that — if he didn’t want to give the money to Osthoff, he should return it to the individual donors.

“After that, he refused to take any phone calls and basically ghosted me because he knew that he was doing something wrong,” Boll said.

Boll and Osthoff said they thought about going to the police, but “we had such limited information, we weren’t able to do anything.”

“I had to panhandle and beg just to get the money to euthanize and cremate her. It was awful,” Osthoff said.

The congressman calls the allegations a distraction

Calls to Santos’ office by NPR went unanswered, but on Thursday he addressed the allegations on Twitter.

“The reports that I would let a dog die is shocking & insane,” Santos tweeted. “My work in animal advocacy was the labor of love & hard work.”

He added: “Over the past 24hr I have received pictures of dogs I helped rescue throughout the years along with supportive messages.

“These distractions won’t stop me!”

The reports that I would let a dog die is shocking & insane. My work in animal advocacy was the labor of love & hard work. Over the past 24hr I have received pictures of dogs I helped rescue throughout the years along with supportive messages.

These distractions won’t stop me!

Santos is being investigated after a series of lies

Among colleagues in the House, Santos has been held at arm’s-length as a cascade of revelations about his fabricated biography continues to come to light. Constituents in his district staged several rallies early this month, demanding Santos’ resignation. Meanwhile, local Republican leaders have described him as a pariah and a pathological liar.

Santos has admitted to lying about graduating from Baruch College (he has not graduated from any college); working at Goldman Sachs and Citigroup (he now says he worked with a company that worked with the financial giants); owning 13 properties (he owns none); and his Ukrainian grandparents being Jewish and having fled the Holocaust (in fact, both grandparents were born in Brazil, and he was raised Christian).

On Wednesday evening, The New York Times reported that Santos lied about his mother having escaped from the World Trade Center on 9/11. According to the Times, immigration documents show that she was living in Brazil at the time of the attacks.

The 34-year-old faces federal, state and local investigations. Santos’ federal campaign records show that he loaned his campaign more than $700,000, but the source of that money has yet to be explained.

House Speaker Kevin McCarthy, R-Calif., has not supported calls for Santos to resign, saying, “The voters have elected George Santos.” And on Tuesday, Santos was appointed to the House Science, Space and Technology Committee and the Small Business Committee.

Osthoff is apoplectic over Santos’ political career and seeming success.

While he holds Santos responsible for Sapphire’s death, he said, he tries not to spend too much time thinking about him. That has been harder lately given how often Santos appears in the news, he said.

“It’ll just send me to a dark place, and I don’t want to go there.”

Osthoff’s life is stable these days. He has a home, a job and two new dogs that, he said, “make me so happy.”

“My life is good,” he said, which is why he now feels obligated to warn others about Santos.

He added: “The dog’s already gone, and I’m not expecting to get any money back. I just want to see him never do this to anybody else again. I don’t want somebody else to feel that way.”

NPR’s Will Chase contributed to this report. 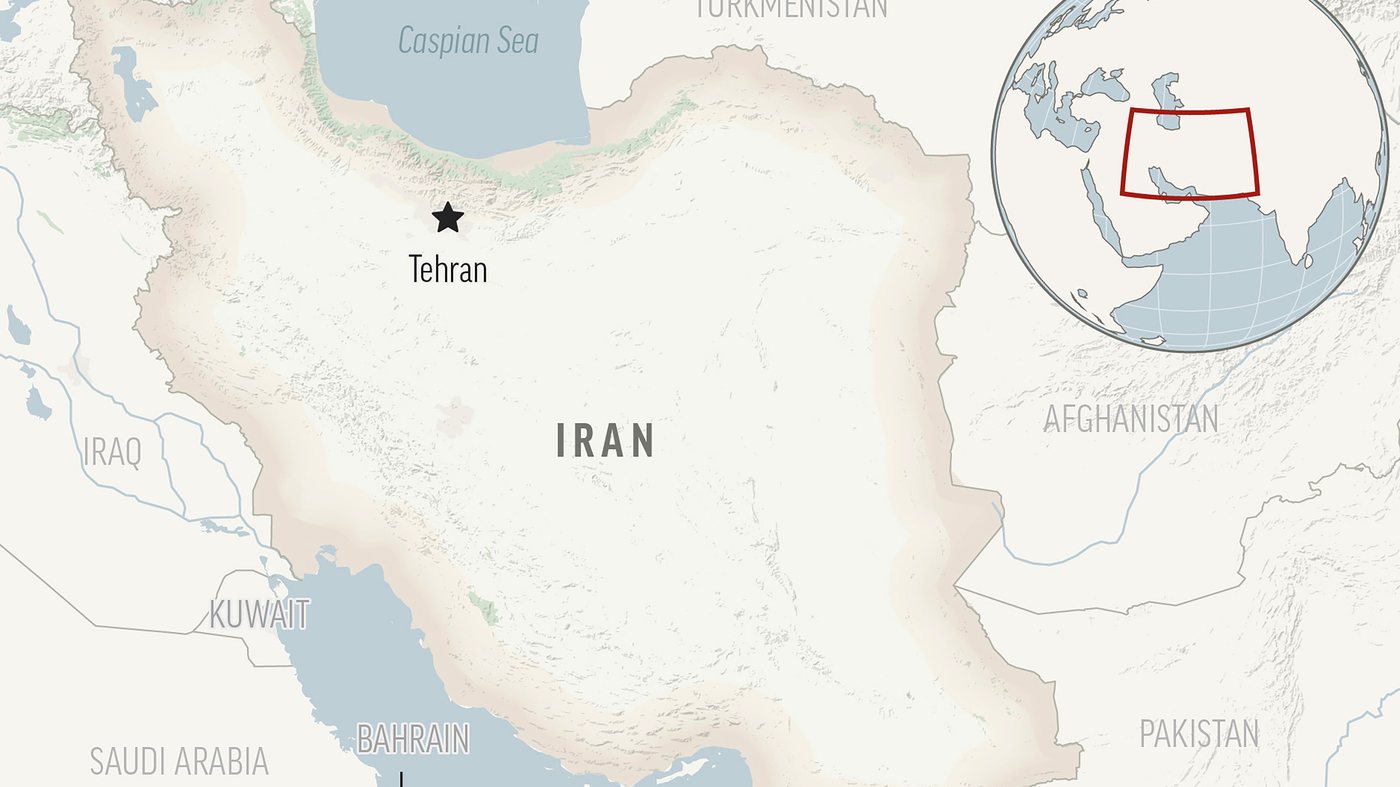 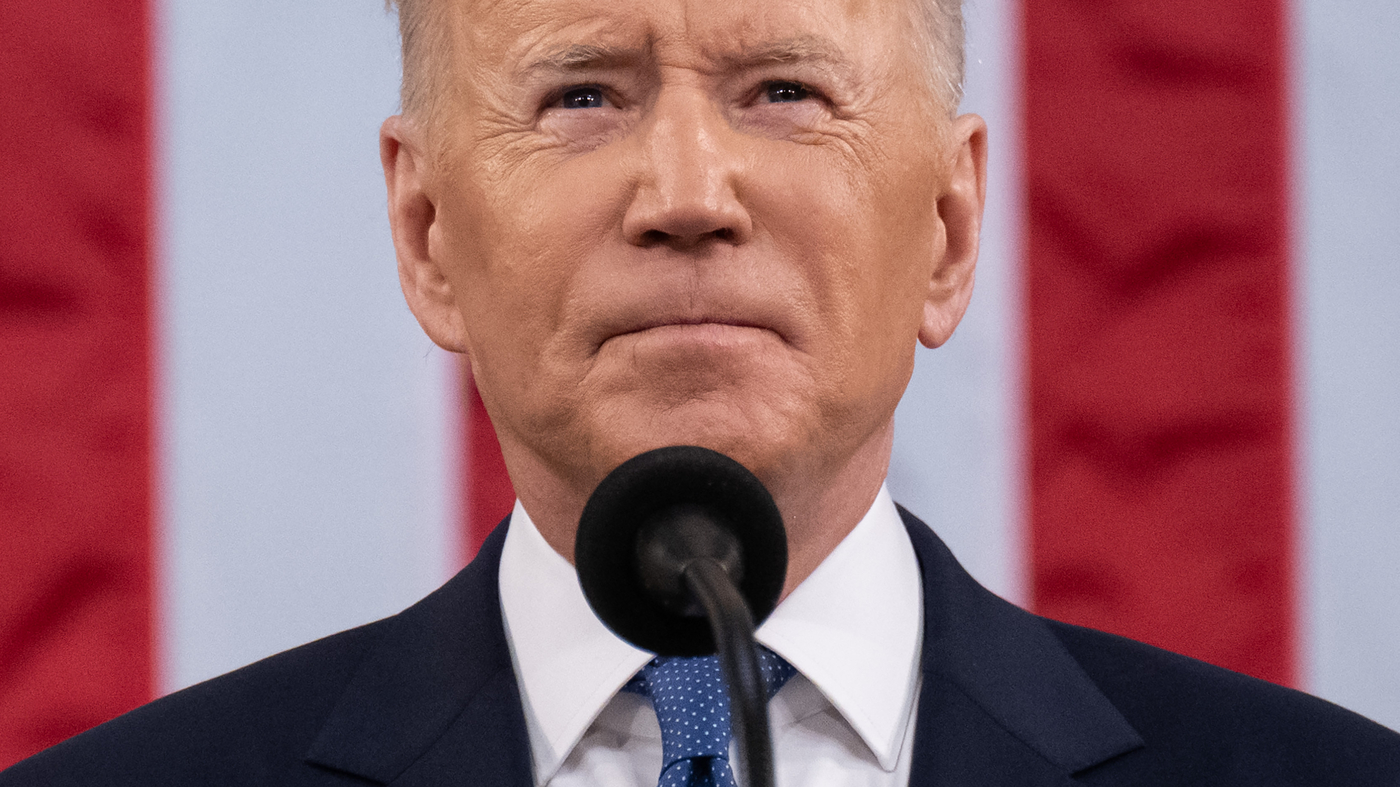 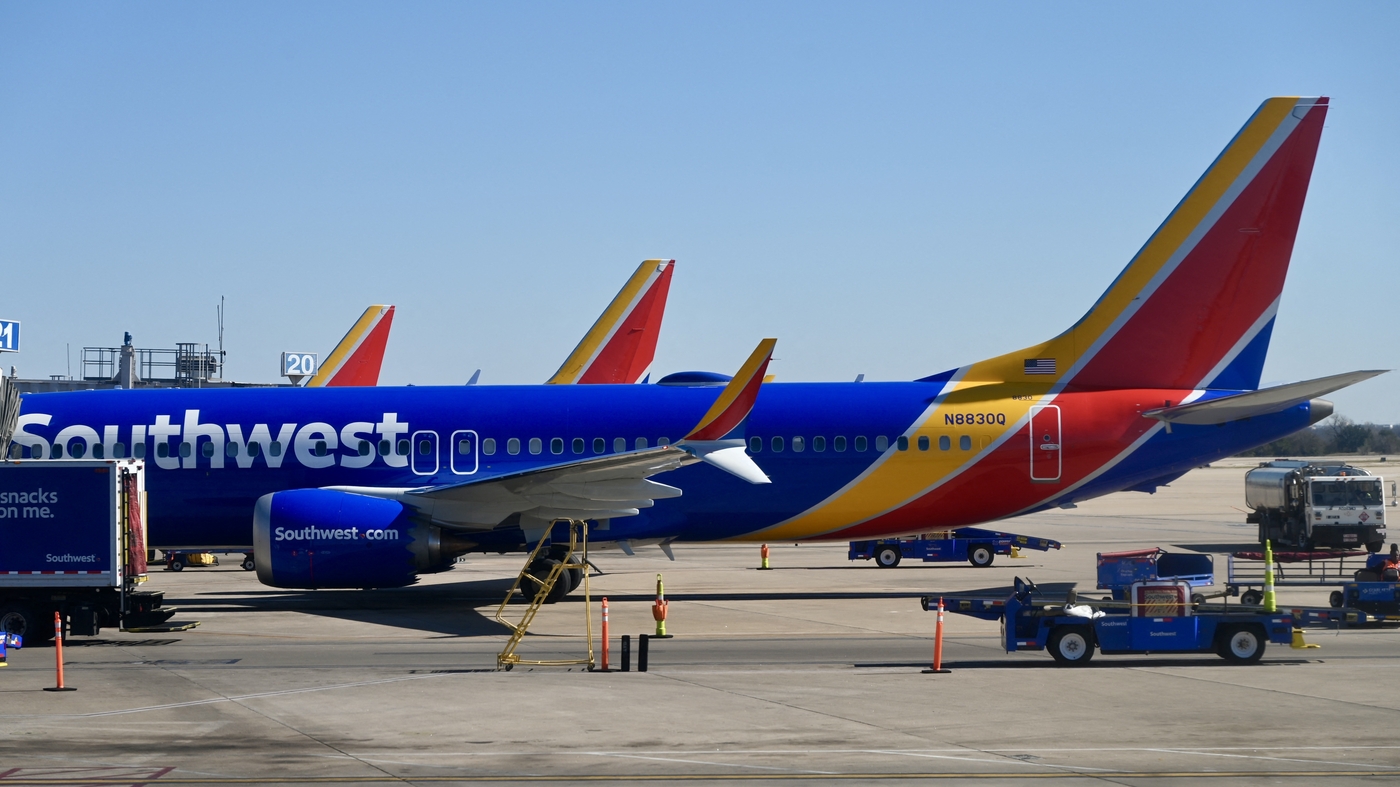 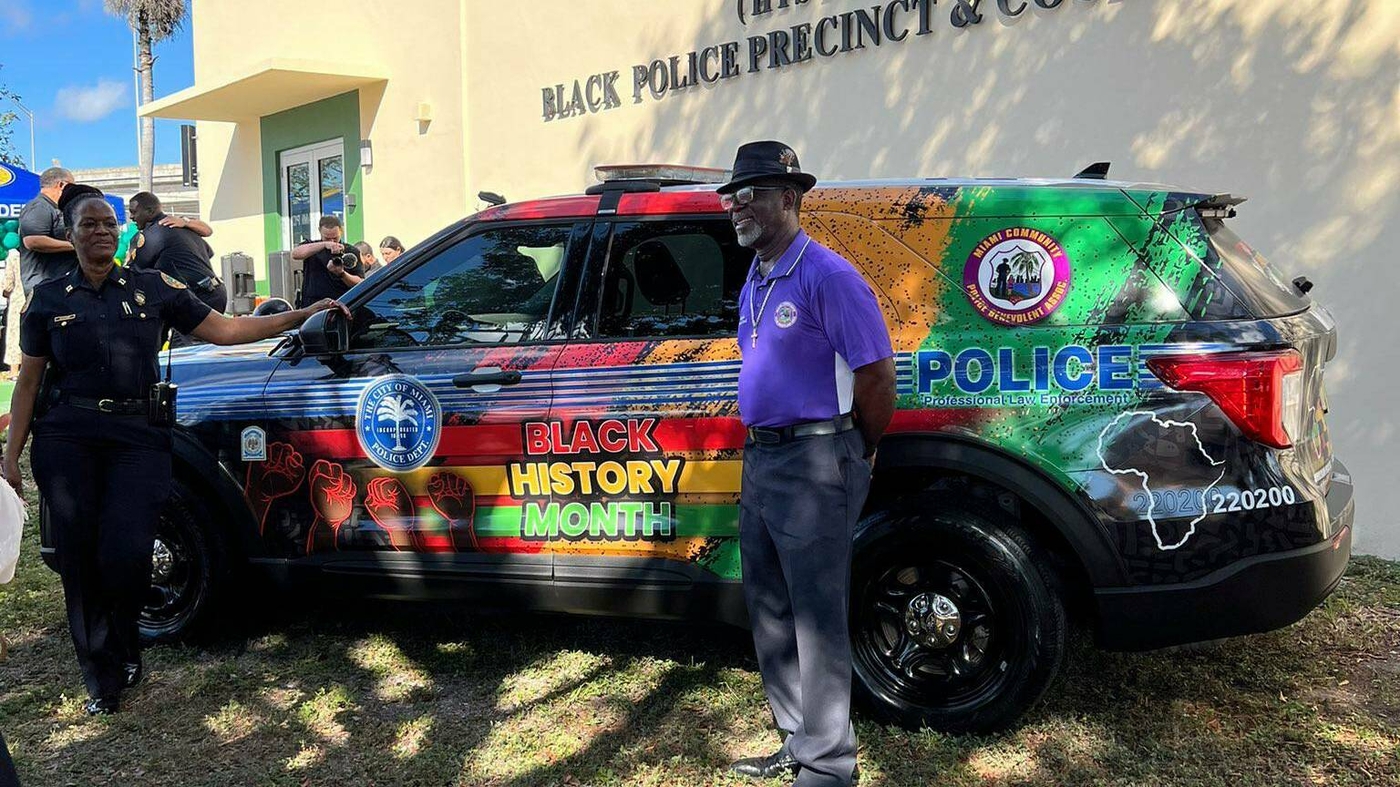 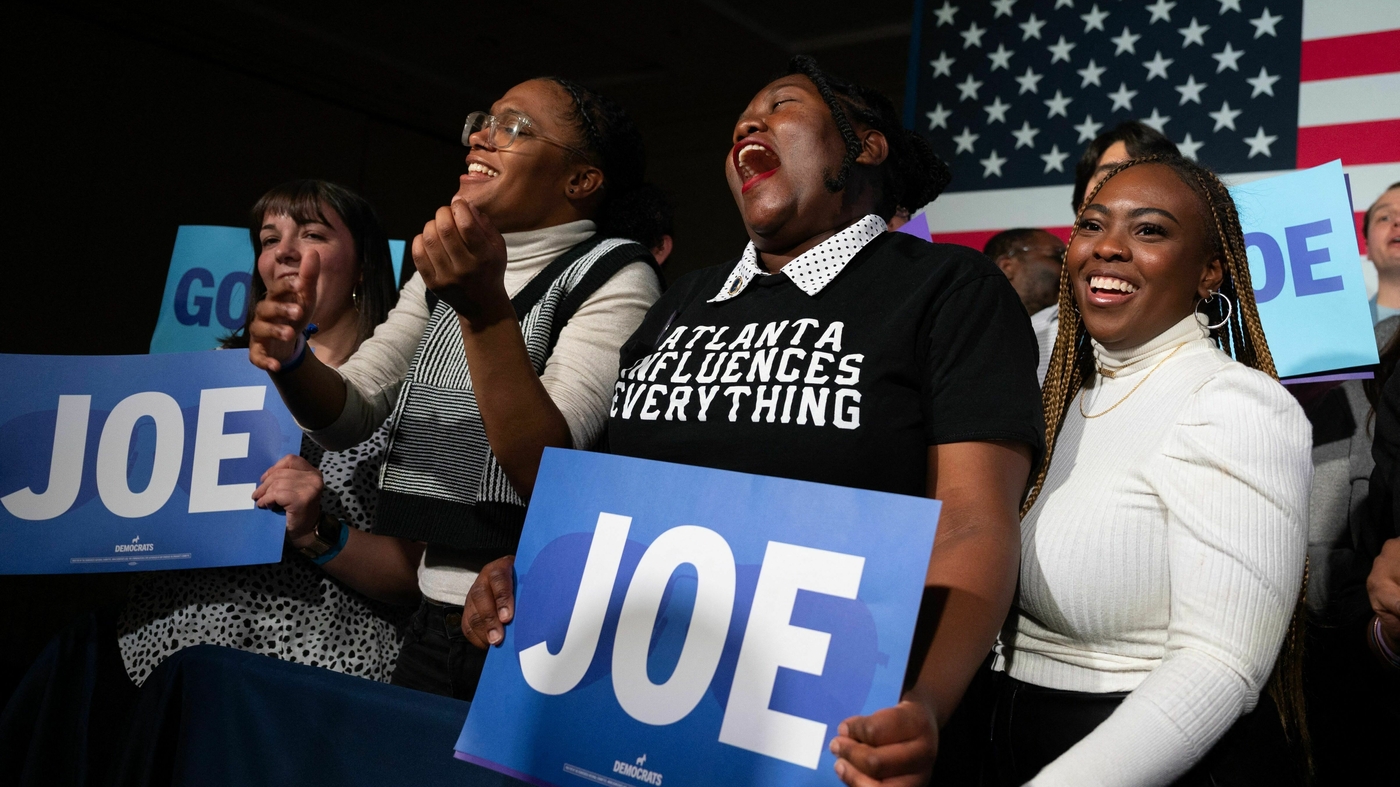 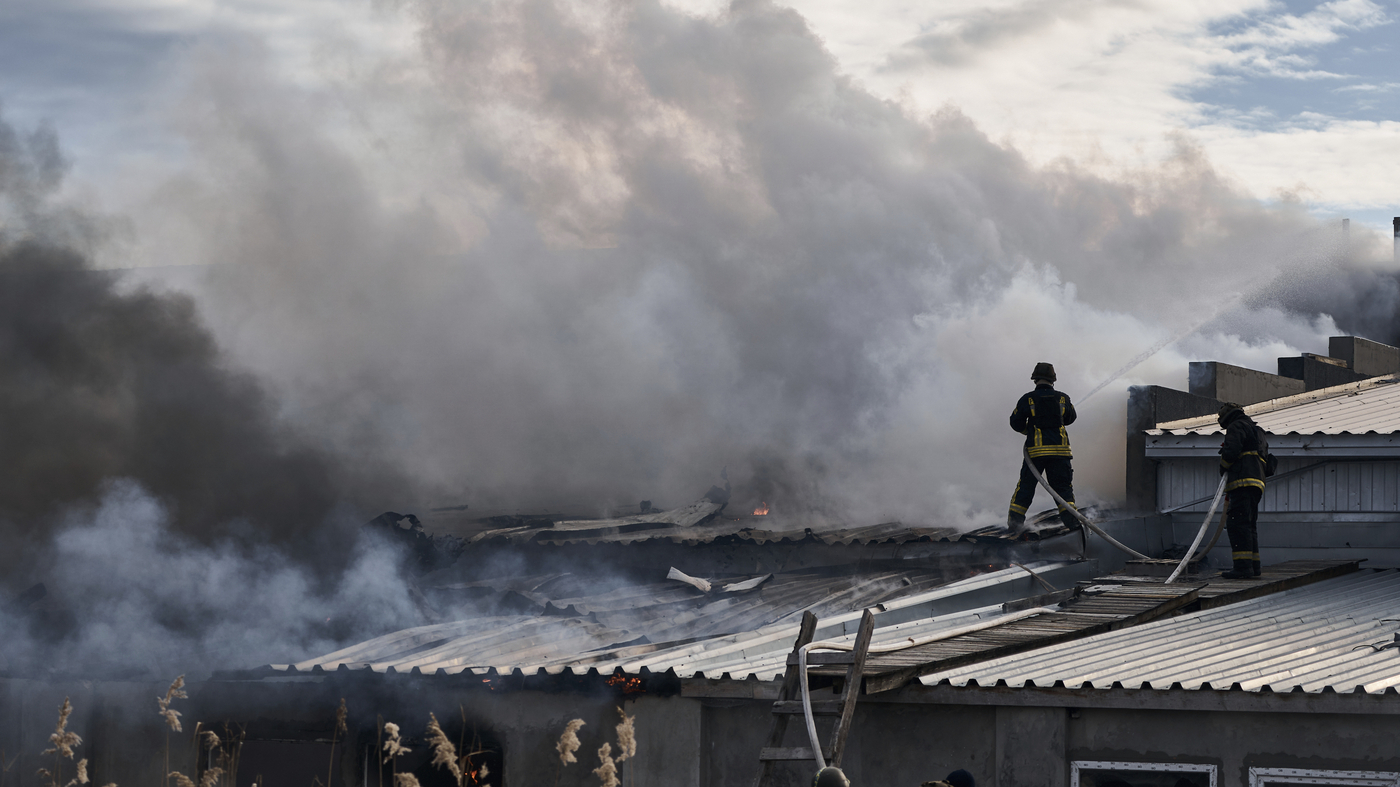