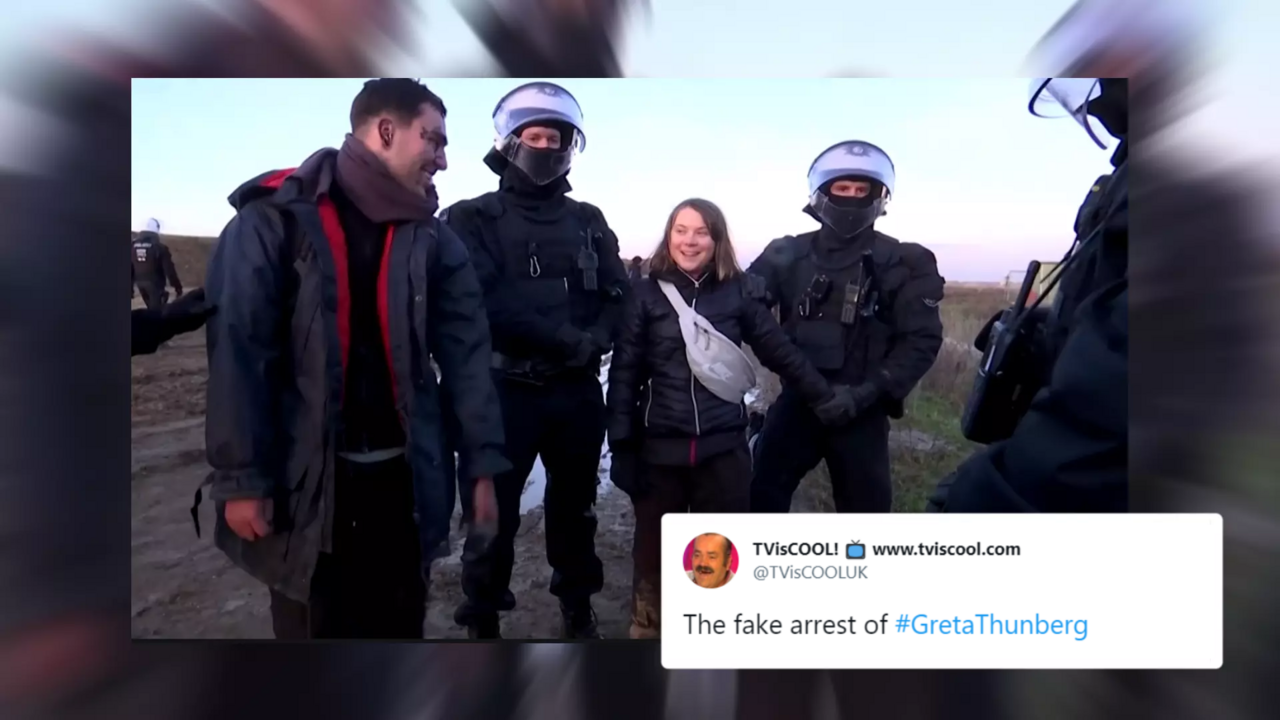 Swedish activist Greta Thunberg was arrested on Tuesday, January 17 during a sit-in protest against the expansion of a coal mine in Lützerath, Germany. A video showing Greta seeming to pose for photographers while being held by police officers garnered more than ten million views in two days. This video has fed accusations that the arrest was staged. However, the video that has been circulating online is just a clip and the full video tells a different story. Moreover, a journalist who witnessed the incident said it was real, as did German police.

If you only have a minute:

The fact-check, in detail

“The fake arrest of #GretaThunberg. All set up for the cameras,” wrote one Twitter user who shared a video showing the smiling Swedish activist getting her picture taken while being held by two police officers, before being taken away.

Greta Thunberg participated in a protest on January 17 organised by activists to denounce a plan to expand a coal mine, which would destroy the village of Lützerath, located in western Germany.

Some social media users saw the footage as proof that everything was staged for the media, meaning that Thunberg wasn’t really arrested. The most widely shared video, posted with a caption in English, has garnered nearly 12 million views by January 20.

The full video begins with Greta Thunberg sitting down in the middle of other activists. Police then drag her out of the sit-in, gripping both her hands and her feet. They carry her several feet away from the crowd.

The footage showing Thunberg smiling while being held by two police officers doesn’t appear until 30 seconds into the video. Her smile seems to be in response to a comment made by another activist, also being restrained by police: “Didn’t know you were famous. Take a selfie?”

Did the journalists covering the protest know that the Swedish activist would be attending? Our team spoke to the Reuters team who covered the event and they said that they didn’t know Thunberg would attend. They were as surprised as anyone when they saw her joining the sit-in.

But why did the German police stop and let Thunberg pose for the press? Our team spoke to police in the Aix-la-Chapelle region, which includes Lützerath:

The entire group of people including Greta Thunberg had to give their personal details to the police, they were not under arrest [Editor’s note: Greta Thunberg was brought to a police van before being quickly released, according to Reuters]. We did not know that she would be there.

We would never give ourselves to make such recordings, we are not the extras for the staging of Greta Thunberg. It would be better to ask her whether she deliberately brought about the situation.

We are grateful that the policemen and women acted so professionally during the police measures on site. During the mission there was very isolated criticism that press work was restricted and now the posed photos are being discussed? That shows how difficult it is to please everyone.  We always said that it is important, the police, enable reporting and guarantee the protection of media workers in critical situations. Both were given at this point and that’s why the journalists were able to do their work.

In a tweet shared on January 18, Greta Thunberg said, “Yesterday I was part of a group that peacefully protested the expansion of a coal mine in Germany. We were kettled by police and then detained but were let go later that evening. Climate protection is not a crime.”

This is far from the first time that Greta Thunberg has been in the media. She first rose to fame back in 2018 when she went on a strike in front of her school to denounce “climate inaction.”

In August 2019, she crossed the Atlantic by boat to participate in a climate protest being held alongside a United Nations summit. During this trip, she also went to the White House to protest against US President Donald Trump.

Journalists love to film and photograph Thunberg, which has reinforced the perception from some that she is a star constructed by the media or that she colludes with journalists, without any real proof.

There is also a lot of false information circulating about Greta Thunberg. She has been accused of taking bribes from lobbying groups. Others have said she doesn’t respect her own commitments, as stated in this 2019 article by France Info.