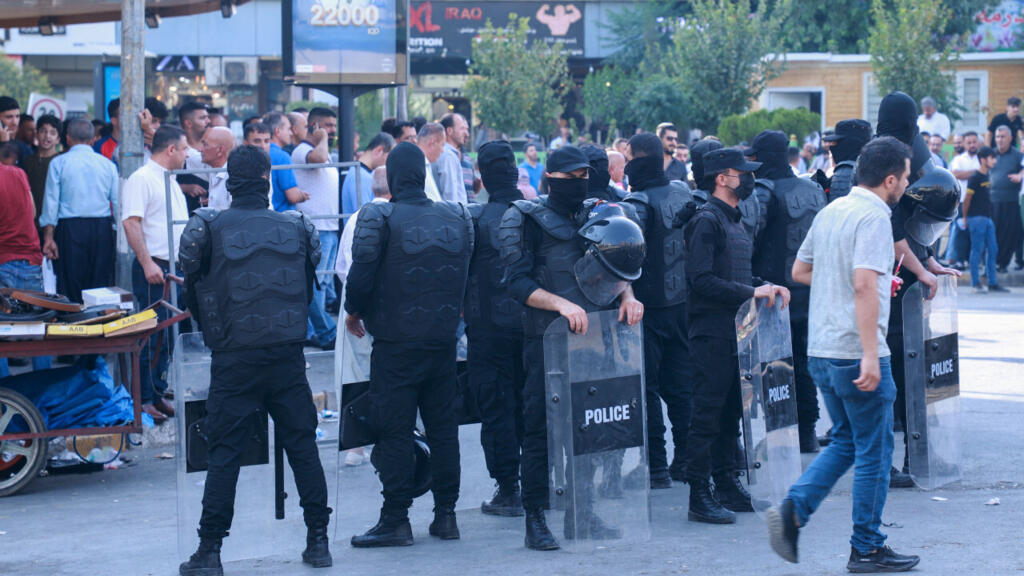 Iraqi Kurdistan, the autonomous zone considered a haven of stability in a war-torn country, has been roiled in recent days by political tensions. A violent crackdown on an anti-government protest last weekend and the arrest of parliamentarians from an opposition party have sparked alarm bells in the region.

The northern Iraqi autonomous zone of Kurdistan appears to be catching up with the chaos and political stability that has gripped Iraq since the October 2021 parliamentary elections.

On Saturday, August 6, security forces in Kurdistan fired tear gas and rubber-coated bullets to disperse anti-government protests in Sulaimaniyah. The opposition New Generation party had called for protests in Sulaimaniyah and other cities in the autonomous region to demand better living conditions and for regional elections to be held on the scheduled date.

In addition, “at least 60 journalists were targeted by the police” during the demonstrations, according to the NGO, Reporters Without Borders. Of the 26 journalists arrested, “at least 10 were journalists from the NRT TV station, which is owned by Shaswar Abdulwahid, a businessman and founder of the New Generation party.

The crackdown underscored the tensions in the Kurdistan Regional Government (KRG), which has been dominated by the rival Kurdistan Democratic Party (KDP) and the Patriotic Union of Kurdistan (PUK).

The autonomous region’s Western allies were quick to condemn Saturday’s violence. On August 8, the US embassy in Baghdad expressed its “concern” over the use of violence by the security forces and urged local authorities to “review these actions and reaffirm the vital roles that a free press, peaceful assembly, and the rule of law play in a democracy”.

This concern was shared by several EU nations, including France, which called on the KRG “to uphold public freedoms” in a statement issued on August 7 by its consulate general in Erbil.

In recent years, Kurdistan local authorities have been singled out by several international rights groups, including Human Rights Watch, for human rights violations.

“The main Western partners of Kurdistan were very quick to condemn the weekend’s events because, since 2003, and until recently, the KRG embodied in their eyes an alternative model of stability in relation to the powers that be in the region,” said Adel Bakawan, founder and director of the Paris-based French Centre for Research on Iraq (CFRI). “Its main strength, if not the only one, is this image, cultivated for decades, of a land of cultural and political diversity, very symbolically consecrated by Pope Francis’ March 2021 visit to Erbil.”

The crackdown comes at a disquieting time in Iraq and the Kurdish autonomous region, said Bakawan.

“It must be noted that there is a certain nervousness within the KRG, which can be explained by several factors. These include the international context, which has been disrupted by the economic and geopolitical fallout of the war in Ukraine, as well as political chaos in Iraq, which can, at any time, tip into civil war and directly threaten the security and stability of Kurdistan,” he explained.

Bakawan believes that a resurgence of the Islamic State (IS) group also poses a threat to the autonomous Kurdish territory. In addition, recent Turkish attacks on the Kurdistan Workers’ Party (PKK) – which Turkey and its allies consider a terrorist group – have caused many civilian casualties in northern Iraq.

“The KRG, which is also under pressure due to tensions with Baghdad over the management of Kurdistan’s oil wealth, seems to favour the security approach to deal with a number of issues and maintain security and stability in the territory. This is to the detriment of dialogue and interaction,” he said.

In addition to the international and national contexts, the Kurdish territory is also shaken by internal political rivalries. “We must keep in mind the highly political nature of the events of August 6, which the two camps, the KRG and New Generation, are trying to exploit,” said Bakawan.

He explained that around the time New Generation leader Abdulwahid issued a call for protests, in the Iraqi capital, Baghdad, supporters of influential Shiite leader Moqtada al-Sadr were staging a sit-in outside parliament.

Sadr’s supporters have staged the sit-in since July over a political stalemate that followed the October 2021 elections. The Iraqi Shiite cleric was the biggest winner but failed to form a government free of Iranian-backed parties.

He withdrew his lawmakers from parliament and is now preventing the chamber from electing a new government. Sadr is instead demanding early elections.

Abdulwahid’s call for protests in Kurdistan’s cities were not widely followed by the Kurdish population since the demonstrations were mainly composed of New Generation supporters and elected officials, explained Bakawan. “Even if the mobilisation against corruption and living conditions are totally legitimate, the New Generation approach was considered demagogic and political by those among the populace who totally reject the entire political class and no longer believe their discourse,” he explained.

The New Generation Movement’s attempt to position itself as an alternative to the current power perplexes experts such as Bakawan. “It is led by a wealthy businessman considered a part of the system, without a clearly defined ideological line: is it an Iraqi nationalist party? A Kurdish movement? Is it liberal? It is not clear. For example, Shaswar Abdulwahid strongly supports the Shiite leader Moqtada al-Sadr, while resolutely opposing Sadr’s Kurdish ally, the KDP,” said Bakawan.

The party, which was founded in 2018, won nine of the 64 seats allocated to the Kurds in the Iraqi national parliament in the October elections.

In Kurdistan, it is competing and trying to challenge the domination of the two main parties, which are led by rival political families.

The KRG is led by KDP deputy chief, President Nechirvan Barzani, who is the nephew of Massoud Barzani and grandson of party founder Mustafa Barzani.

“It is especially in the south, in the Talabani stronghold, that New Generation has wrested the vast majority of its nine parliamentary seats, a significant figure since the PUK won only 18 seats,” explained Bakawan.

This tough political tug of war between the PUK – which is well established historically, financially, militarily and administratively – and New Generation, which does not have the same resources, is reflected in tensions on the ground.

All eyes on regional elections

From a purely political point of view, the August 6 crackdown suggests that the authorities are very wary of New Generation ahead of the upcoming regional legislative elections. The poll was scheduled for early October, but has been postponed to a later date.

The postponement of the Kurdish regional elections has been another source of political tensions. On Thursday, UN special representative for Iraq, Jeanine Hennis-Plasschaert, called on all parties to resolve their differences to end the political deadlock, according to media reports. The key issues surrounding the upcoming vote include the composition of the electoral commission as well as calls to amend the region’s decades-old election law.

While a date has not been set for regional elections, Kurdish leaders have said they will be held before the end of the year, said Bakawan.

“The PUK and the KDP, two rivals who see themselves as the builders of Kurdistan and the guarantors of its stability, are certainly afraid of losing part of their electorate to other political forces, even though this scenario seems unlikely, given that the opposition is so divided between different secular, Islamist and liberal currents that it is difficult to bring them together in the same block,” concluded Bakawan.

This article is a translation of the original in French.

The Mandalorian Directors Discuss If George Lucas Would Cameo In Star...

Mark Ruffalo Thinks There Might Be A Hulk Solo Movie Coming...