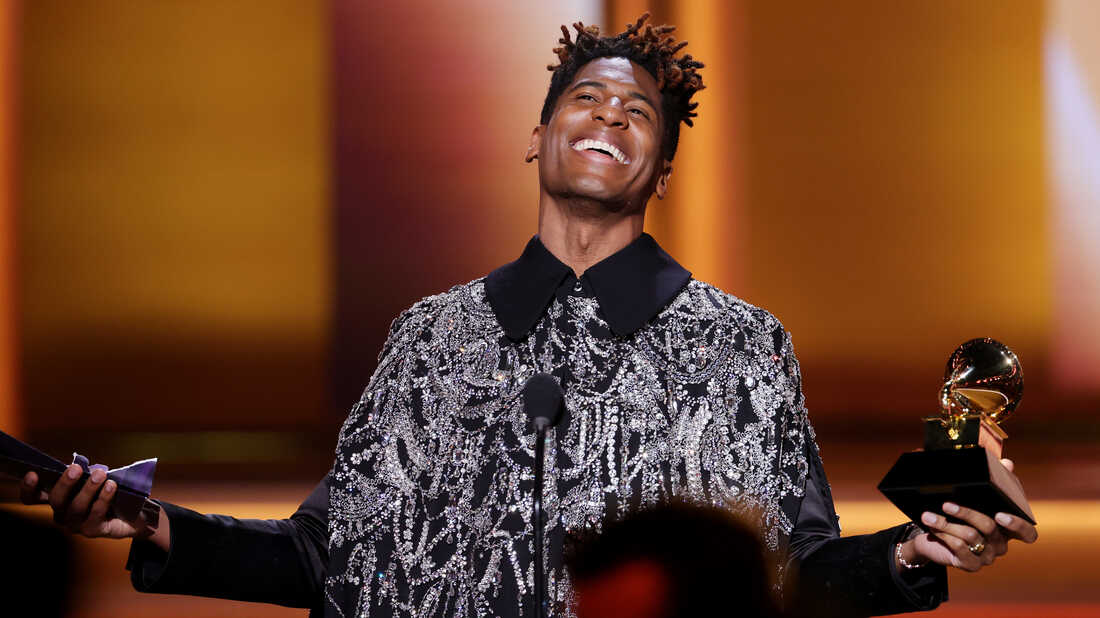 Jon Batiste accepts the Grammy for album of the year at the 64th annual Grammy Awards, presented Sunday, April 3 in Las Vegas. Batiste was the night’s biggest winner by the numbers, with five awards including the night’s final honor. 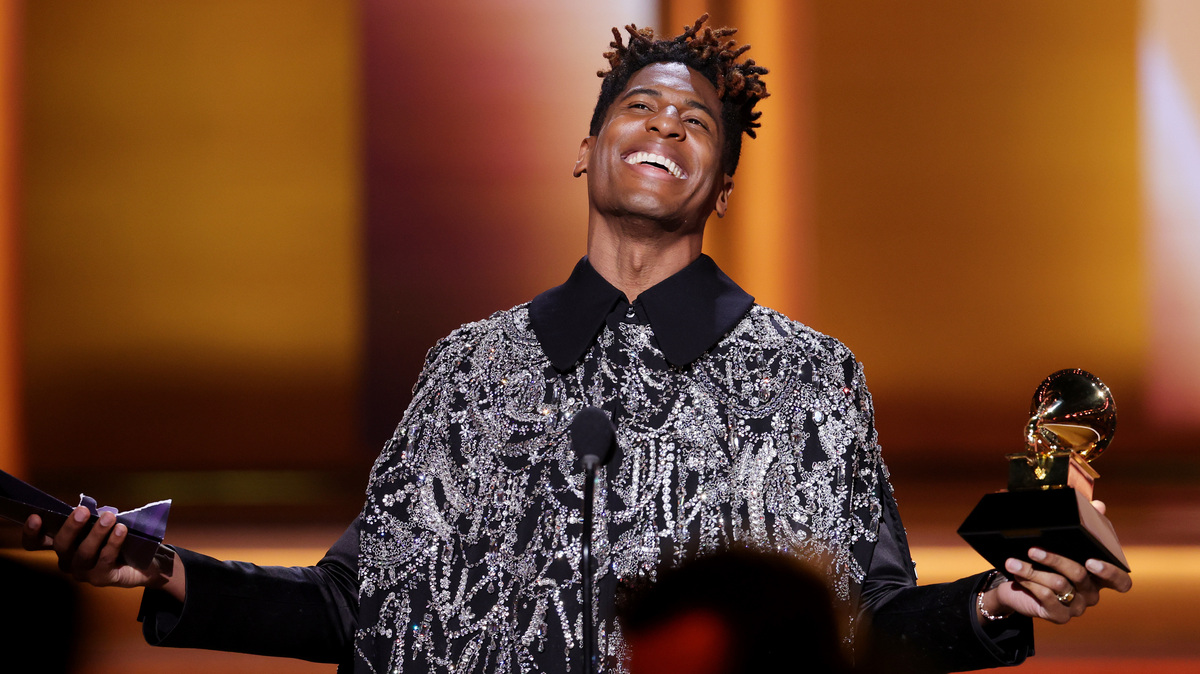 Jon Batiste accepts the Grammy for album of the year at the 64th annual Grammy Awards, presented Sunday, April 3 in Las Vegas. Batiste was the night’s biggest winner by the numbers, with five awards including the night’s final honor.

At the 64th Grammy Awards, which took place Sunday in Las Vegas, the major prizes were spread among a number of winners, including Jon Batiste, Silk Sonic and Olivia Rodrigo.

By the numbers, the night’s biggest winner was Jon Batiste, who took home the majority of his five awards in what the Grammys call the premiere ceremony, the pre-telecast event during which the vast majority of prizes are given out annually. In a group of 10 heavy-hitting contenders, Batiste won album of the year for We Are.

“I just put my head down and work on the craft everyday … It’s more than entertainment for me, it’s a spiritual practice,” Batiste said in his acceptance speech for album of the year, shouting out the other performers nominated in the category. “Be you, that’s it.” He also stressed that there are no “best” artists or albums, rather that “it’s like a song or an album is made and it almost has a radar to find a person when they need it the most.”

Before picking up the album of the year prize, Batiste also gave a jubilant, technicolored performance of his song “Freedom,” dancing and leading performers off the stage and into the audience, where he finished the song jumping atop the table where Billie Eilish was seated.

The throwback R&B act Silk Sonic — led by the duo of Anderson .Paak and Bruno Mars — won four awards: record of the year, song of the year, best R&B performance (in a tie with Jazmine Sullivan) and best R&B song of the year. Mars is a Grammy favorite. This was his third win for record of the year, and his last solo album, 24K Magic, swept the top categories four years ago. Silk Sonic made its television debut at last year’s Grammys with “Leave the Door Open,” which would accumulate awards throughout 2022’s awards show.

“Because of you guys, me and Andy are going to be singing this song forever!” Mars said in his speech accepting the first award of the night for song of the year. “Rest of our lives,” echoed Anderson .Paak, who later joked, when accepting another award for the same song, that it was hard for the duo to “stay humble.” Silk Sonic opened the Grammys with their performance of “777,” a fitting ode to the ceremony’s 2022 location: Las Vegas.

Singer Olivia Rodrigo took home the prizes for best new artist, best pop vocal album and best pop solo performance. She had been nominated for seven awards. Rodrigo performed her hit “drivers license” during the show, set against the backdrop of a suburban street fit with a real car. The 19-year-old singer-songwriter teared up during her acceptance speech as she accepted her best new artist award, telling the audience it was her “biggest dream come true.” 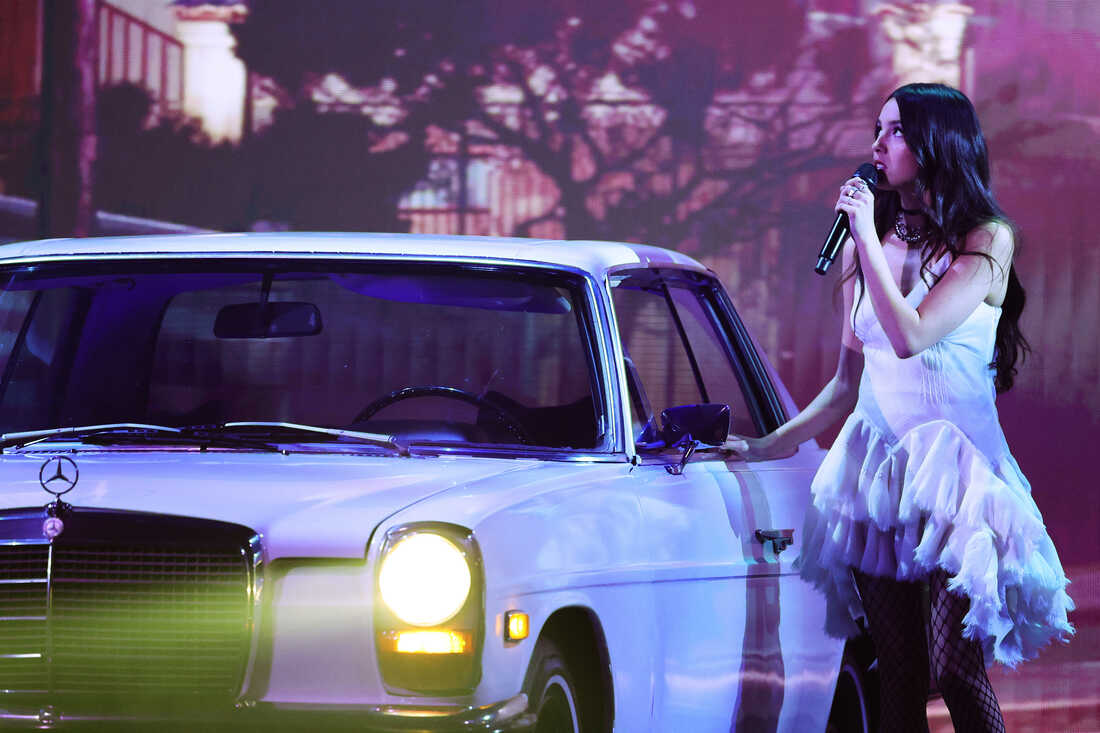 Jazmine Sullivan took home two Grammys, including best R&B album for her album Heaux Tales, after being nominated for Grammy Awards twelve times before winning at this year’s ceremony. “I don’t know what I heard, I almost didn’t believe it,” Sullivan said in her acceptance speech, appearing stunned after her name was called for best R&B album.

Foo Fighters won three Grammys on Sunday, sweeping all the non-metal rock categories. But the band, who had previously been scheduled to perform during the telecast, retreated from public view after the sudden death of its drummer, Taylor Hawkins, at age 50 on March 25 while on tour in Colombia.

The telecast of the 64th Grammy Awards was, in general, a zippy, good-humored evening lightly peppered with awards presentations and generally filled with feel-good performances. But the evening took two serious turns, with a heartfelt In Memoriam segment that began with an extended tribute to Hawkins and featured a medley of songs written by Stephen Sondheim and a taped appearance by Ukrainian president Volodymyr Zelenskyy.

In his emotional message, Zelenskyy spoke about the plight of his people and of his country’s musicians, “who have traded their tuxedos for body armor.”

There was no singular theme running through the night’s wins and losses, and while there were a few quick nods to the intensity of last week’s Academy Awards, the Grammy’s rolled out smoothly. With only nine awards given out during the televised ceremony, the show gave a heavy focus to its wide-ranging performances.

J. Balvin performed a medley of his hits “Qué Más Pues?” with Argentine singer Maria Becerra and “In da Getto.” And boyband BTS delivered a spy-themed performance for their song “Butter,” with seamless choreography and audience participation from Rodrigo.

Lil Nas X, in a variety of glittering costumes, performed a dazzling three-song medley of his biggest songs from his 2021 album MONTERO: “Dead Right Now,” “MONTERO (Call Me By Your Name),” and “Industry Baby” with rapper Jack Harlow. Both Lil Nas X and Doja Cat, known for their viral, conversation-starting antics as artists and performers, appeared on stage during the night. But Lil Nas X’s performance was professional in its excellence, though not as incendiary as the star’s fans and critics may have come to expect, and Doja Cat’s acceptance speech for best pop duo/group performance, which began with her noting she almost missed her win due to being in the bathroom, ended with the rapper choking up with gratitude.

Billie Eilish, who swept the four top categories in 2020 and picked up record of the year in 2021, was nominated for seven awards but won none. Still, she delivered the night’s hardest moment of rock and roll spectacle with her song “Happier Than Ever” alongside brother and artistic collaborator FINNEAS. During her performance, Eilish wore a t-shirt featuring the late Foo Fighters’ drummer Taylor Hawkins. 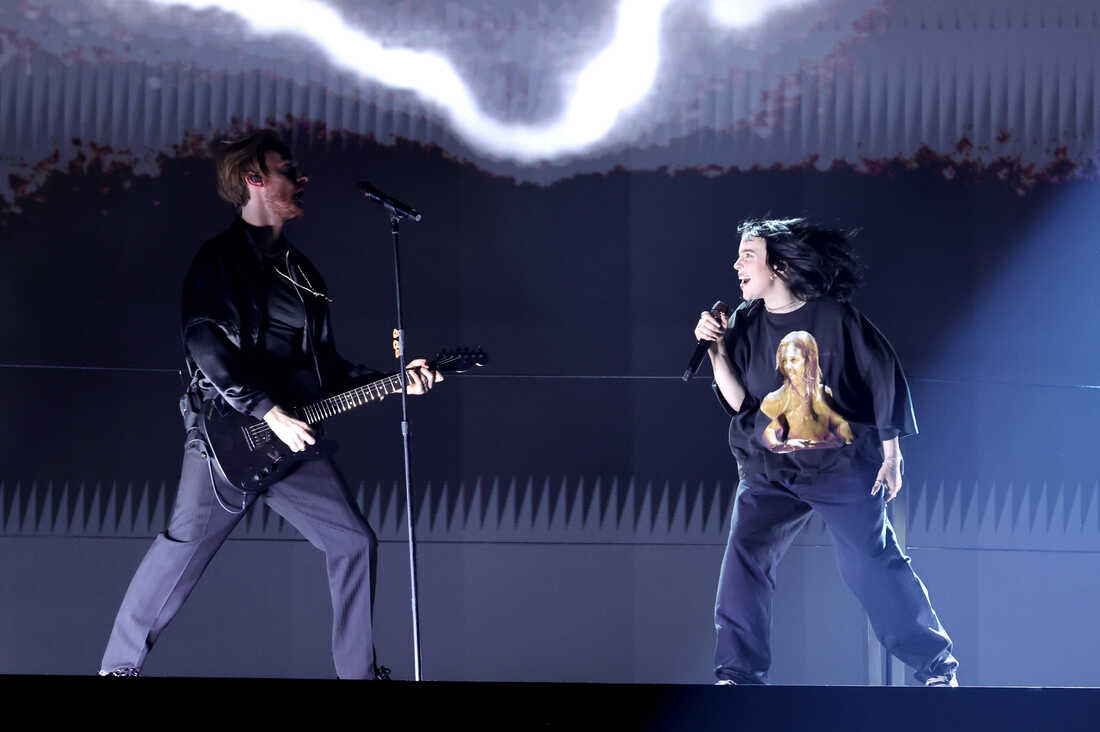 Billie Eilish (right) performs “Happier Than Ever” with her brother and collaborator FINNEAS at the 64th annual Grammy Awards in Las Vegas. Eilish, who was nominated for seven awards but won none, wore a t-shirt with an image of Foo Fighters drummer Taylor Hawkins, who died last month.

Lady Gaga performed a perfectly retro set of the songs “Love For Sale” and “Do I Love You” from her album Love For Sale with Tony Bennett, which won a Grammy for traditional pop vocal album earlier in the night. Bennett, who retired from performing last year, introduced Gaga via a pre-recorded video. With a montage of their time in the studio playing in the background of Gaga’s performance, the moment was a powerful reminder of their collaborative relationship.

H.E.R., who was nominated for eight awards and won a Grammy for best traditional R&B performance, performed two of her own songs with three different collaborators on stage — Jimmy Jam, Terry Lewis and Travis Barker — before singing a rendition of Lenny Kravitz’ “Are You Gonna Go My Way” alongside the rock star himself, the two shredding dueling guitars.

The night also frequently emphasized the work of he work of less visible players in the live music industry ravaged by the pandemic. The ceremony featured touring managers and other employees for artists including Billie Eilish, H.E.R., Carrie Underwood and Chris Stapleton, who appeared on-stage to introduce their respective artists and remind audiences at home of all the work that goes into making the magic of live music performance.

This story originally Appeared on NPR.org

What do we know about ‘petal mines’ scattered in the streets of Donetsk?

Fatty liver disease: Staying up late could put you at high...

‘The White Lotus’ Heads to Sicily for Season 2 as HBO...

At Least 8 Children in the U.S. Have Now Tested Positive...

A plan to reorganize the CDC aims to speed up its...

What do we know about ‘petal mines’ scattered in the streets...