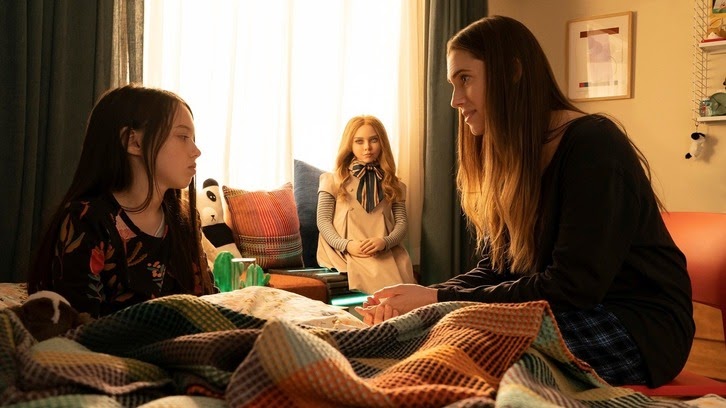 All in on this movie from the word go: the sheer insanity, gonzo energy of a film that knows exactly what it is – Gerard Johnstone’s thriller from Malignant writer Akela Cooper plunges you into a scaringly on point world that makes a commentary on parenting and the ease that parents turn to screens to keep their children distracted. This takes the form of an AI in M3gan; but it quickly grows beyond its capabilities and never makes its lead serial killer robot unlikeable despite it all – it’s helped by the trope where the people it’s killing are all more unlikeable than it.

The film is crazy, wild and knows what it is and what it wants to be. The needle drops drew laughter from my screening and the crowd were having a great time watching it – it knows how to pull all the tricks of a bonafide crowd pleaser. The dance sequence, the creative kills, its sympathetic likeable leads – M3gan is tailor made and ready out of the box, just like its AI. There’s a few pacing issues here and there and the film never truly goes as *insane* as it could’ve been – especially when the set-up is there for it to do that – but keeping the action squarely focused around the aunt-orphaned child parenting of Gemma and Cady, played by Allison Williams and Violet McGraw allows a personal touch.

One of the downsides of studying media is that you’re aware of the Chekov’s Gun premise which has ruined so many films for me at a base level and I think M3gan falls victim to that in its own way; but the moment when the ‘gun’ goes off is a creative call. The close confines of the house make the situation all the more tense; and the film is on point in its commentary of artificial intelligence – the opening advertisement could’ve almost been a real TV ad and you wouldn’t have blinked an eye. This is a film very aware of the genre that it’s operating in too – the opening introduction to Cady and her parents feels like a nod to The Shining; but mercifully – much of M3gan‘s likeability comes from the fact that it’s clearly its own thing, not wallowing too much in the past – and although you know exactly where it’s going it has a great time in getting there.