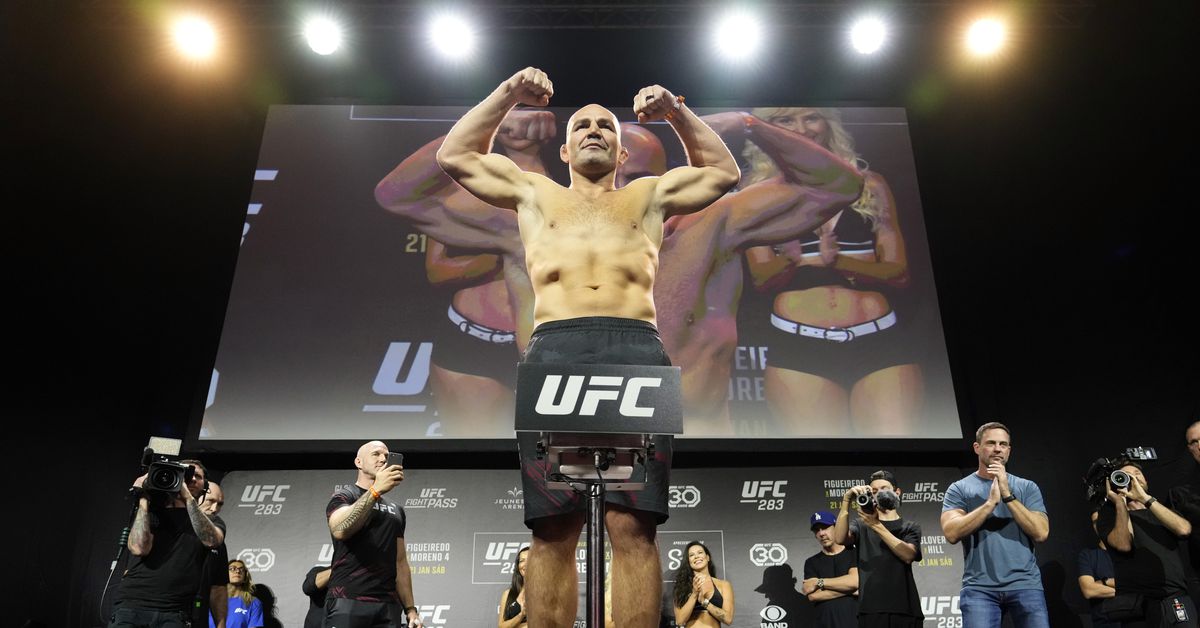 Ultimate Fighting Championship (UFC) is set to kick off its pay-per-view (PPV) campaign for 2023 as UFC 283 goes down TONIGHT (Sat., Jan. 21, 2023) from inside Jeunesse Arena in Rio de Janeiro, Brazil. Headlining the event is a Light Heavyweight title fight for the vacant belt as former champion, Glover Teixeira, faces off against top contender, Jamahal Hill. In UFC 283’s co-main event, Flyweight champion, Deiveson Figueiredo, and interim title holder, Brandon Moreno, will fight for the fourth (and hopefully final) time in a title unification match.

Plenty of eyebrows were raised when a title fight between Teixeira and Hill was booked immediately after Jan Blachowicz and Magomed Ankalaev fought to a split draw at UFC 282. That’s because most expected an instant rematch given the controversial outcome. Instead, UFC President, Dana White — perhaps out of defiance since he was unhappy with the outcome of UFC 282’s headliner — booked Teixeira vs. Hill. So, Teixeira gets the chance to reclaim the title he lost to Jiri Prochazka, and Hill gets to come in as the dark horse as the No. 7-ranked fighter in the division.

Hill has been nothing short of stellar during his time with UFC, racking up a 5-1-1 record with four of those wins coming by way of knockout. He has youth on his side (he’s 31) and has built some momentum over the last couple of years because he hasn’t just beaten randoms, he has taken out former title contenders like Ovince Saint Preux and Thiago Santos, as well as rising stars like Johnny Walker and Jimmy Crute. His resume is legit and is now one win away from reaching the top of the sport. I mean, seriously, how many of you had Hill pegged as a potential champion this early into 2023?

Hill will have his work cut out for him because he will be facing a grizzled veteran with experience for days. Teixeira has been around the block a few times so there isn’t much Hill can throw at him that he hasn’t already seen. Teixeira has tasted championship gold inside the Octagon once before, and he wants nothing more than to enjoy that feeling again. Hill may have a slight speed advantage, but Teixeira can crack, and if he clips Hill it could be “Sweet Dreams” for him.

Yeah, I’m still sticking to the whole mess in the Light Heavyweight title picture. Dana White is always adamant about not talking about potential fights immediately after events, and he reminds the media time and again when asked those specific questions at the post-fight pressers. But, this time around emotion got the best of him and he decided to book Hill vs. Teixeira. Look, if you’re going to throw a pity party at the outcome of the fight, make sure it’s clean across the board every weekend and stick to your guns about not booking fights immediately after events. Anakalaev clearly won that fight, in my opinion, so he should have at least gotten the chance to run it back for the strap against Blachowicz.

Melquizael Costa agreed to make his short-notice UFC debut to take on Thiago Moises after Guram Kutateladze bowed out of the Lightweight bout for undisclosed reasons.

Brad Tavares was forced out of his scheduled fight against Gregory Rodrigues with an undisclosed injury. As a result, he was replaced by Brunno Ferreira, who will be making his Octagon debut.

As previously mentioned, Brunno Ferreira will make his UFC debut at 30 years of age with a mint (9-0) record as a late replacement against Gregory Rodrigues at Middleweight. “The Hulk” has never seen the judges’ scorecards after racking up six knockout wins and three submissions. It’s not the easiest of debuts because Rodrigues is an absolute monster and has won four of his first five fights inside the Octagon.

Winner of seven of his last eight fights, Melquizael Costa has a tough draw in his first official fight inside the Octagon as he has been tasked to face Thiago Moises in a Lightweight affair. “Kaut” hails from Brazil and has proven to have a well-round arsenal, winning seven fights via knockouts, six via submission and six by decision. As for Moises, he recently snapped his two-fight losing streak by defeating Christos Giagos this past summer.

Undefeated (13-0), Daniel Marcos makes his UFC debut, taking on Saimon Oliveira in Bantamweight action. Marcos earned his spot on the the roster by defeating Brandon Lewis on Contender Series. The Peruvian has six wins by way of knockout, while Oliveira is looking for his first win inside the Octagon after coming up short in his own debut at UFC 270 one year ago.

Staying at 135 pounds, Luan Lacerda will bring his 10-fight win streak to the Octagon as he faces off against long-time UFC veteran, Cody Stamman. Of Lacerda’s 12 wins, 10 have come via submission, so it’s no secret what he prefers to do once the action gets going. If he can get a win over Stamman, it would be a great way to put the division on notice from the jump.

In a rare sight, brothers Ismael Bonfim and Gabriel Bonfim are set to make their UFC debuts on the same card. Ismael, 27, competes in the 155-pound division and is on a 12-fight win streak with his last loss coming nine years ago. He will battle Terrence McKinney, who is 3-1 in his young UFC career and is fresh off a submission win over Erik Gonzalez five months ago. Gabriel, meanwhile, is two years younger and fights at Welterweight. He is undefeated (13-0) with 10 submission wins and three by way of stoppage via strikes. He will do battle against Mounir Lazzez, who is 2-1 in his young UFC career.

How The ‘Prelims’ Look:

We have already discussed several fights on the undercard, so let’s take a look at the rest of the action, shall we?

Mauricio Rua will make his final walk to the Octagon as he is set to retire from the sport after a long and storied combat career. While he may have nothing more to prove to the fight game and likely won’t be seeking a new contract elsewhere, you know “Shogun” would love nothing more than to go out on a winning note and avoid a three-fight losing streak for the first time in his career. Rua has been there and done that, but has a tall task ahead of him in his final UFC fight against Igor Potieria, who suffered his first loss in his last 16 outings at UFC 277.

While Potieira is more than a formidable foe, I would have loved to see UFC pair Rua up with a bigger name, a legend of the game such as himself. “Shogun” deserves that much after leaving a big mark on the fight game, winning titles in both PRIDE FC and UFC. At the very least, let him go out on the main card.

Warlley Alves has alternated wins and losses since 2018 and if tradition holds he is due for a win when he battles Nicolas Dalby in a 170-pound collision. In his last fight Alves was knocked out by Jeremiah Wells, so that does not bode well for Dalby. Speaking of which, “Lokomotivo” is coming off a big win over Claudio Silva.

Who Needs A Win Badly:

In the Heavyweight division, Shamil Abdurakhimov will face Jailton Almeida in a must-win fight for him. Abdurakhimov is coming in on a three-fight losing streak and one more defeat could be his one-way ticket out of the Octagon. The man looking to hand him his fourth straight defeat is on a 12-fight win streak.

In what is hopefully the last fight between them, Flyweight champion, Deiveson Figueiredo, will tango with interim champion, Brandon Moreno, for the fourth time. They are 1-1-1 in their three fights, so there really should be no reason for them to fight again, barring another whacky outcome, of course. That’s not to say their three fights weren’t exciting, its just time for something new for both men … please.

One of the more intriguing fights is a Welterweight collision between Gilbert Burns (No. 5) and Neil Magny (No. 12). Burns hasn’t competed since his loss in an epic war against Khamzat Chimaev at UFC 273 in April 2022, bringing him to 1-2 in his last three fights. Magny, meanwhile, was last seen defeating Daniel Rodriguez in Nov. 2022. Now that Magny finds himself out of the Top 10, a big win over “Durinho” will put him back in the mix. Regardless of the outcome, the winner of this fight sets himself up for a big showdown against a top-ranked foe next.

In addition, Jessica Andrade and Lauren Murphy will do battle in a women’s Flyweight fight that could have major title fight implications. Andrade is on a two-fight win streak and is looking to crack the Top 5, while Murphy is fresh off a win over Meisha Tate. With Valentina Shevchenko set to defend her title against Alexa Grasso, the winner of this fight could get a shot the winner of that title tilt further down the road.

Paul Craig saw his four-fight win streak go out the window after Volkan Oezdemir dominated him for 15 minutes last summer. Ranked No. 9, Craig has the chance to make things right for himself with a big win over Johnny Walker, who at one time was considered a legit threat to the 205-pound title; however, over the last three years he has looked like anything but. With a record of 2-4 in his last six fights, Walker is trying to collect his first two-fight win streak since 2019.

Remember that MMAmania.com will deliver LIVE round-by-round, blow-by-blow coverage of the entire UFC 283 fight card right here, starting with the early ESPN+ “Prelims” matches online, which are scheduled to begin at 5:30 p.m. ET, then the remaining undercard on ABC/ESPN+ at 8 p.m. ET, before the PPV main card start time at 10 p.m. ET on ESPN+ PPV.